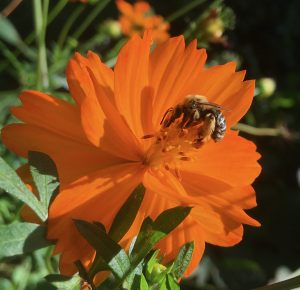 We may be transitioning to fall but there are still enough bees out there for you to learn to use the app and be ready to just pick it up and go when your crops or flowers start blooming next year. Training is included when you download and set up the free app. You can also see our quick 5- minute survey protocol here and learn our 5 basic bee groups here. You can use WiBee to track your own local pollinators as well as participate in a statewide project.

Just like there are late summer or fall flowers, there are late season bees. Wisconsin has over 400 wild bee species, and while we think of bees generally as spring and summer animals, at least 26 species dont start flying until July and may continue into October. Another 14+ species do not even start to fly until August. Many of these are solitary nesting bees in the genera Andrena (mining bees), Pseudopanurgus, and Melissodes (the long horned bees). Each female is collecting pollen and nectar to store in her own small nest for her young. When she is done she seals the nest and the next generation is on their own. See more about solitary wild bee nesting here.

Social wild bees, such as bumblebees, build up colonies in the spring which persist through summer but then start to fall apart in fall. Generally only the mated gynes (future queens) will overwinter, the rest of the colony dies off. In fall the colonies switch from producing worker bees to producing new gynes and males. Bumblebees can fly in cool temperatures and as long as it’s about 55 degrees you may see them out. You may get a close look as the cold makes them sluggish in the morning or evening. One may just wave a leg at you, which is their way of saying “shoo” (not “high-five!”)